One year after exceptionally skipping the fall film festival season, Netflix has once again relied on Venice, Telluride, San Sebastian, New York and Toronto as the starting point for some of the films that will hit the platform before the end of the year. After seeing Culpable and Starling, the conclusion is clear: the Canadian appointment has been the black sheep in the cast of the company’s world premieres. If the film starring Jake Gyllenhaal was a reminder – as entertaining as it is inconsequential – that Anglo audiences are still biased with subtitles, Starling is a new misstep in the relationship between Melissa McCarthy and Netflix.

The actress premiered last April Thunder patrol, an action comedy with better intentions (two superheroines with normative ages and physicists must save the world) than results (the action was regrettable and the humor was far beyond the possibilities of two such charismatic and funny stars as McCarthy and Octavia Spencer ). Their next collaboration isn’t much better, with a tone halfway between the light and the melodrama he never seems to be able to decide what kind of movie he wants to make Theodore Melfi.

Those who are curiously awaiting the new job of the director of Hidden figures (a proposal that did know how to move skillfully between various tones and genres) will be disappointed because of Matt Harris’ script tendency for the obvious metaphor and a premise that seems, by bizarre, based on real events. It’s not.


After the death of their only child, a married couple deals with trauma differently. Jack (Chris O’Dowd) lives temporarily in a psychiatric facility, while Lilly remains in the real world, dealing with her own guilt and an internal struggle that paralyzes her from day to day. The appearance of a starling that has nested in her yard and that begins to harass and attack her leads the woman to seek help from Larry (Kevin Kline), a quirky psychologist turned vet with his own traumatic past. Together they will realize that the troubled relationship with the bird is nothing more than a representation of the traumatic loss that Libby has experienced in the last year.

In case the intentions of Starling, there is a scene from the movie that exactly verbalizes the connection between these birds and the loss from the mother who plays McCarthy. The part-time veterinarian and psychologist (a character who years ago would have played -and filled with the life that the script does not know or wants to give him- the longed for Robin Williams) explains to the woman that the starlings build and protect their nest as a group , underlining that “they are not made to live alone in the world.” McCarthy then puts himself in the shoes of the audience and ironically highlights how unsubtle he is being a stranger who, after the tragedy, has become his only escape route.

Kevin Kline does what he can with an underdeveloped character.

Nor can the Netflix movie (a standalone project that the platform acquired after shooting for $ 20 million) really be accused of pretending to be subtle. Throughout the entertaining and well-intentioned 100 minutes of the film, there are endless scenes between a bird (a computer design that reminds us that no matter how much technology has advanced, it is still very difficult to recreate animals realistically) and a woman who spells out those feelings and frustrations that Libby is unable to address.

The constant appearance of pop – country songs by artists like Brandi Carlile, Nate Ruess and The Lumineers further evidence the ideas of the script of Matt Harris. Subtext is not a concept that appears in the dictionary of Starling. 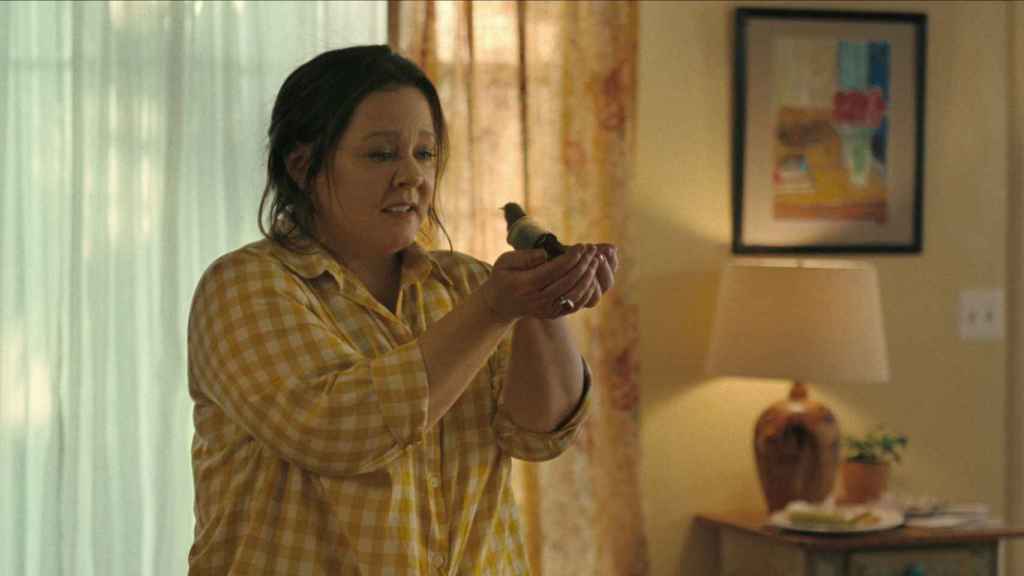 The relationship with a bird will help the protagonist to cope with the duel.

Can you ever forgive me? and Nine Perfect Strangers They had already shown that, far from the overwhelming charisma and her innate ability to explore the most physical and vulgar humor, Melissa McCarthy is capable of bringing a humanity and complexity to her characters that did not allow her career to be intuited until then. Her new film returns the actress to more dramatic terrain. McCarthy does what he can to get down to earth to a character caught in incredible situations and conversations and it gives you practically nothing to play with.

Chris O’Dowd (one of the computer scientists of The I.T. Crowd) like her husband, a man paralyzed by the tragedy who feels guilty for what happened and who, without intending it, ends up punishing the only person who can understand what he is going through. His are the most powerful scenes of a movie that does not know what to do with a complex theme that explores a tragedy that we had previously seen in movies like The secrets of the heart and the winner of the Palme d’Or Son’s room.

If it’s a grief story you’re looking for, the films by John Cameron Mitchell and Nanni Moretti are the answer. Starling it is not more than a light and harmless drama on a subject that is anything but light and harmless.

‘The Starling’ premieres on Netflix on September 24 after its world premiere at the Toronto Film Festival.

• ‘Secrets of a Marriage’, a remarkable and clever remake of Bergman’s masterpiece

• ‘Kate’, an action heroine who does not skimp on violence and spectacle in the new Netflix movie

• ‘Cinderella’, updating the fairy tale for the 21st century based on music and diversity

Many Thanks To The following Website For This Valuable Content.
‘The starling’, an obvious reflection on the duel that Melissa McCarthy misses