The message is clear: vaccines are indispensable and yet, for the moment, everything cannot be reopened as it was before the pandemic. This is stated in a study signed, among others, by the president of the Higher Institute of Health Silvio Brusaferro, of the Director of Health Prevention Gianni Rezza and the mathematical epidemiologist Stefano Merler of the Bruno Kessler Foundation, entitled “The effects of Covid-19 vaccination in Italy and the prospects for ‘living with the virus'”.

It is already reviewed and accepted by an important scientific journal that will publish it in the coming weeks and as of yesterday available in preprint on medrxiv.org. A mathematical model allows the authors to estimate that the vaccinations of the first six months of the year, from 27 December 2020 to 30 June 2021, “allowed the resumption of about half of the social contacts recorded before the pandemic; in the absence of vaccinations – they write – it would have been possible to recover only about a third to obtain the same number of infections, with the additional cost of about 12,100 more deaths“. That is a 27 percent increase in mortality essentially due to the greater circulation of the virus among people over the years, in that hypothesis not vaccinated. Those six months began when almost everything was closed, Christmas in the red zone that we will hardly forget, ending in June with almost everything reopened, but the stadiums, for example, no.

The study recalls that “in the European Union, despite the widespread relaxation of the restrictive measures of social distancing granted by governments in the summer of 2021, the peak of mortality has never exceeded 1.5 deaths per million (per week, Ed.) From when Delta became dominant in July, compared to more than three times higher from November 2020 to April 2021 ”.

According to the authors of the article “the global spread of the highly transmissible Delta variant has probably suppressed the remaining possibilities of eliminating Sars-Cov-2 through herd immunity alone”. However, they calculate that in our country “the negative effect of the spread of the Delta variant last July was fully offset by vaccinations in July and August 2021 “. In fact, they write that “if the Alpha variant had remained dominant until September 2021, our estimate is that the continuation of the vaccination campaign would have produced a decline in the reproduction index (Rt, Ed) from 0.92 at 30 June to 0, 61 to 7 September. With Delta, 50 percent more transmissible, the mathematical model’s estimate is 0.91, “close to the observed value of 0.83” on the same date of 7 September.

Today everyone has understood that the Covid risk is still there, the curves are rising, hospitals at least in part are already forced to reduce non-urgent outpatient and surgical activities to make room for patients affected by Sars The 2 and by now we know that the delays accumulated since February 2020 will cost tens of thousands of deaths in the years to come from undiagnosed diseases, skipped visits, postponed interventions. Indeed, there is discussion of possible yellow zones, of any changes in a restrictive sense of the green pass system, of Christmas holidays perhaps will not be completely free as we would have expected, also on the basis of proclamations of rulers and scientists who attributed much higher results to vaccinations to those, even if decisive, that they could have and have had. The contents of this study have been known since September 27 to the CTS, which listened to Merler and then recorded: “The Cts, unanimously, agrees that the presentation of the data based on the models developed by dr. Merler fully support the strategy of proceeding to reopen / resume activities following the principles of graduality “. Two months later they are forced to discuss any restrictions on the green pass, the only ones currently possible without touching the rules that provide for 20 percent of intensive care units and 30 percent of medical departments occupied by Covid patients to get to the closures envisaged for the orange areas. That is another disaster. And how many deaths? Nobody dares to say it, not even the authors of the article.

Quirinale, Micciché: “Berlusconi al Colle with the votes of Iv, Renzi told me”. The former premier denies. But the Ars president confirms

According to the study “a complete return to pre-pandemic life could only be safely achieved if more than 90 percent of the population, including children over 5, are vaccinated with the mRna vaccines developed in 2020“. The European Medicines Agency (EMA) will decide from November 29 on the immunization of children between 5 and 11 years, already excluded by some EU countries. “In any case, the increase in vaccination coverage will allow further margins for reopening even in the absence of a pediatric vaccine“. Basically, “depending on the measures that will be maintained or the vaccination coverage acquired, we estimate that the reproduction index will be able to assume values ​​between 0.7 (if contacts do not increase and coverage approaches 100 percent) and 1, 8 (if the social activities will be fully resumed and the rules abandoned without increasing vaccination coverage) “, reads the article. Rt actually reached 1.8 but in August, when we were at the beach and especially the boys were infected; today it’s colder, we stay indoors and at 1,2 we already dance despite the vaccines.

The authors of the article calculated the social contacts in proportion to the pre-pandemic ones, made equal to 100, working on the reproduction rate of the Rt virus, the reduction of which depends to some extent on vaccinations – whose effectiveness is known. – and for the rest precisely from the decrease in the relationships in presence between people, on which there are also scientific studies: if it passes from 1.5 to 0.9 and that 0.6 is half due to vaccinations, it means that the other 0.3 (equal to 30 percent) depends on fewer social contacts. “The scenario of complete recovery of the pre-pandemic social life – reads the article – would involve the removal of all the factors that still reduce the contacts of a single individual compared to before. These include: the remaining government restrictions (eg: capacity limits in stadiums and discos or indoor restaurants, etc.); organizational measures that reduce crowding (for example: limits to the occupation of spaces in the workplace and work from home, distance between desks in schools, compulsory reservations for recreational and cultural activities, rules on weddings and other events); education in social distancing; individual choices with which each reduces the risks for themselves “. 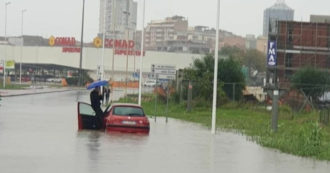 Cagliari, “I asked for help and people took pictures”. The man in the symbolic photo of the storm on Facebook: “They passed and did not stop”

In short, we have gotten used to it a little but we do not live as before. The study also recalls the Covid certificate in force in the EU and much more rigid in Italy, but also “the ventilation and air filtration systems on public transport, the Plexiglas separators in restaurants or at the counter or in public offices, the masks, the tracing and isolation protocols “. And he concludes: “Although quantifying the impact of each measure is extremely difficult, it is likely that many of them will be maintained for a long time without a significant negative influence on the economy and social life.. Therefore a complete resumption of prepandemic contacts in the sense considered by the model is not necessarily a key objective“. Like it or not, scientists write, we will still have to “live with Covid”

The ISS and Kesseler Foundation study on vaccines, here are how many deaths were avoided