Slavia failed in the land of the Israeli master, he longs even more for revenge.

That’s why they have to beat Haif at home on Thursday night. “We believe that the fans will help us as well as in the league matches with Olomouc and Pilsen, when we felt their energy,” believes the Ukrainian legionary Taras Kačaraba in the help and magic of Eden.

In the autumn, Slavia defeated another of the rivals in the group, the Bundesliga Union Berlin, which it intends to repeat in a confrontation with Maccabi Haif.

“In Israel, it was not a sufficient performance for us for a European-level match,” coach Trpišovský recalled errors in the defense and unchanged chances, which recruited the loss and subsequent criticism of the team. Slavia’s first man Jaroslav Tvrdík also joined and reminded the players to kindly realize what club they play for.

I expect significantly more from that than recent performances. Maybe all the players don’t understand well what it means to play for Slavia and that you can’t live on the success of the past.

“Now we have managed two important domestic league matches with Olomouc and Pilsen.

“The opponent will definitely rely on his strengths again, which we pointed out to our players before the first match. In front, he has fast and technically well-equipped players who are very unpleasant if they get space, “Trpišovský repeatedly warned, especially against the Ghanaian legionary Donyoh, the author of the goal, which decided the match fourteen days ago.

Godsway Donyoh (right) of Maccabi Haifa scores the opening goal against Slavia in the Conference League.

“Therefore, we must not make a mistake and allow the opponent to take the lead. On the European scene, matches are very difficult to turn around. On the contrary, we have to push Haifa into the defensive with an active and offensive game and then take advantage of the chances we already had enough in Israel, “he indicated what his prepared score for Thursday night looks like.

At the same time, he did not hide the fact that there will be several line-up changes in comparison with Sunday’s league duel against Pilsen.

“The forced state of health of the players, because three of the nominations for Haifa will probably fall out, even the unforced ones, because, for example, we do not have the Meeting on the roster for the Conference League. On the other hand, two players will join the squad, “Trpišovský insisted on the return of Holeš.

“However, Tomáš has only been training for two or three days. He lacks fitness and therefore cannot start from the beginning of the match. Perhaps I will help during it. “ 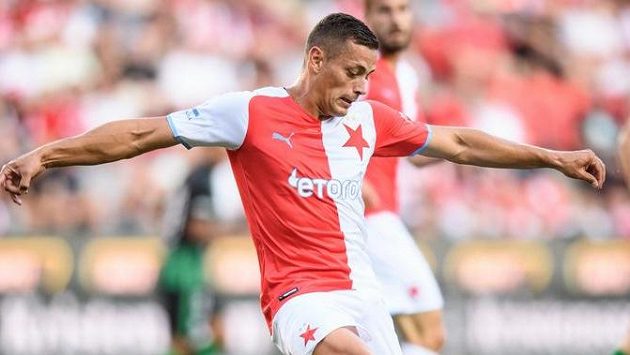 Tomáš Holeš should return to the lineup.

Kuchta, on the other hand, has been attacking at the tip of the attack again since the beginning of the match, even though the last matches did not work out for him and he did not make a mark in them.

“But also because the team did not prepare a service for him, from which he would benefit. We worked on it a lot together and I believe that the team will help him against Haifa and he will help the team. In any case, we anticipate that Krmenčík, who looks great during training, will also get on the lawn during the match, “Slavia’s coach revealed some of his intentions.

Rehabilitation, this is what Slavia will be talking about in retaliation with Israeli Haifa in particular