Hložek did not finish Wednesday’s training and could not play, in the 7th minute the key stopper Čelůstka resigned. On the contrary, Krejčí Jr. returned to the basic line-up. The Letna team got their promise to share it with their favorite again, and they played an open game. And when, for example, Slímání burned a tut solo, the first half ended without goals and the hopes of the guests lived.

Sparta also held on in the beginning of the second half, but in the 61st minute Slímání changed his second solo raid and opened the score. Moreover, when he hit his head two minutes later, the hard-working Spartan hope crumbled to dust.

So it is true that Sparta defeated the French clubs in cups in only two of the 15 duels. She didn’t beat them eight times in a row and lost to them in the last six duels …

“For example, on Tuesday, Lille defeated Seville in the Champions League. It turns out that the French league went up a lot. And the teams working in it are at the level of the top teams in Europe. We came across a team that is one of the best in Europe, “pointed out coach Pavel Vrba.

Sovereign Olympique has already secured progress. “Our group is clear. Lyon is its leader, the remaining teams will play for two more places, “Vrba advised.

Andreas Vindheim (right) from Sparta and Rayan Cherki from Lyon.

A certain advantage was enough for the locals, they kept watch over him in peace. In the end, the people of Prague pushed into the attack in an effort to at least have an honest goal, but they were not wanted. On the other hand, the top scorer of the European League, Toko Ekambi, closed the score in the setting.

France is too hot ground for Sparta. She won only one of eight cup matches here. Lyon did not beat six of the six attempts and succumbed to him five times. 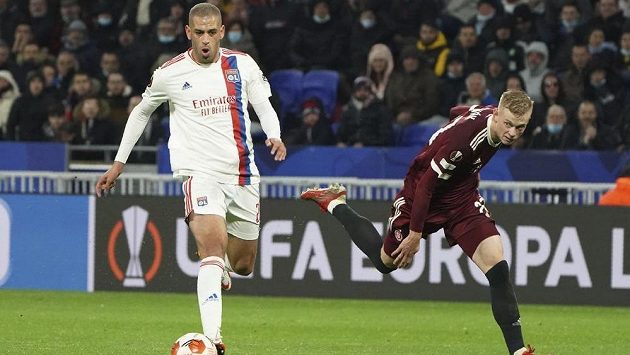 “I looked at Lyon’s roster, and when I saw where they bought players from and what clubs they worked in … It’s incomparable with us. We have a lot of young players who are just starting to play big football. Maybe in three years they will play in clubs like Lyon, or Sparta will reach such a level that they will be here and play European cups, “says Vrba.

“We are learning. It is very important for all of us that we have such a confrontation. Sparta che again play regular groups of European Cups. The more often we play a group, the better for the team, club and fans.

Lyon – Sparta 3: 0, Letna miracle did not work out in France, they have not lost hope of advancement yet