According to the study, the velodrome in Prague’s Motol would also offer outdoor activities – an asphalt circuit, a pumptrack and a freestyle park.

The project is still in the phase of a study commissioned by the cycling association. The existing complex under the Cibulka park has been operating since 2013, when it was opened on the land leased by the municipality by the entrepreneur Zdenek Grondol. The greyhound races and the go-kart track are practically useless. “The complex in its current form has no added value for Prague 5 and its citizens. In the interest of the city district, the sports ground is also intended for the general public, “Štěpán Rattay (Pirates), a representative of the P5 city district, remarked for Sport.cz, who supports the idea of ​​transforming the complex.

The P5 Territorial Development Committee came to the same opinion, which clearly sanctioned the intention with a recommendatory opinion, which should then be confirmed by the city council. “In addition to Prague 5, we also have the support of the municipality and the National Sports Agency, which included the project in the action plan to support sports centers,” Petr Marek, president of the cycling association, told Sport.cz.

According to the study, the velodrome in Prague’s Motol would also offer outdoor activities – an asphalt circuit, a pumptrack and a freestyle park.

The unresolved issue is the settlement of the original tenant’s investments, which Grondol itself estimates at more than 300 million crowns. The cycling association has a budget of 600 million crowns. “We plan almost 100% use of already completed constructions. We don’t want any megalomaniac complex, but a purely purposeful complex, “Marek remarked.

However, in the future, the area should not be used only by track cyclists. “We are working with a multifunctional concept,” Marek said. “The city district welcomes this vision. We want the place to be usable for other sports and ensure the enjoyment of the general public,” Rattay added. According to the study, the velodrome building should also have a 200-meter athletic oval, a multifunctional playground for ball sports and several smaller courts, such as racquet sports, under its own cycle path. The area should also include a pumptrack, freestyle park and a half-kilometer asphalt circuit.

The WeLoveCycling.cz server, which falls under the “cycling” activities of Mladá Boleslav’s Škoda Auto, drew attention to the study. possible involvement – as in the case of Icerink winter stadiums – the management will decide only with regard to the development of further negotiations on the plan. 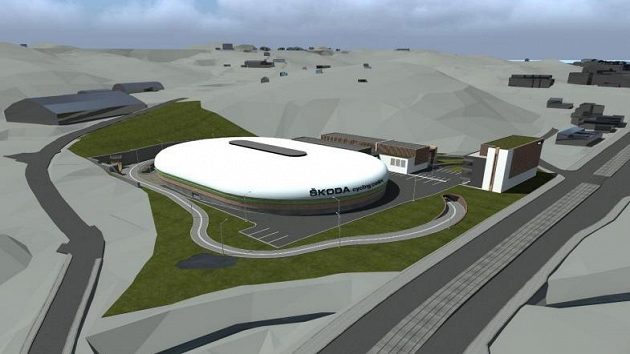 Architectural study of the velodrome in Prague’s Motol.

The situation of Czech railway workers has been bleak for many years. There are several ovals in the country – in Brno, in Prague in Třebešín, in Pilsen, in Prostějov … But none with a wooden surface and representation will find the conditions for preparation corresponding to the world level closest in Vienna.

Currently, however, two projects are raising hopes for a brighter tomorrow. In addition to the plan of the Prague velodrome, the Velodrome project in Brno-Komárov is already underway. He should receive a zoning decision in the middle of next year and expects to issue a building permit for 2023. “If we want to compete with the world, we cannot do without the track with Olympic parameters. And I’m not afraid that the two velodromes will not work. Cycling is very popular and modern resorts will attract the attention of young people,” concluded Marek.

Greyhounds do not pull. The dream of a velodrome came to life in Prague