The recording of “Let’s Burn Heaven Again” by the Olomouc band Dirty Old Dogs is undoubtedly one of the best domestic records of this year. Dot. It was released in the spring, but she had to wait for the official mission to the world until the end of October, until the baptism, which promised a family experience of the unique.

A unique experience, among other things, because it took place in the old factory hall in Šibenik, Olomouc, which may (depending on when you read this report) no longer stands. Dirty Old Dogs wanted to take advantage of the unique genius loci and underline a kind of transience that is one of the motifs with “Let’s Burn Heaven Again”. We are here now, but who knows what will happen soon, everything may be like a fire that burns but sooner or later goes out.

The band conceived the whole event more as a happening. In addition to the concert, an exhibition of photographs from the history of the formation and the screening of three video clips was prepared, and the specifically lit hall itself was also an attraction. The smell of burning wood, aged dust, hot drinks, the atmosphere of the meeting and the proximity. Tomm Prochazka, the mastermind behind all this, took care of everything, he wanted to send his child, a studio that had been prepared for years, to the world with all the splendor. Concerns about how the music of the factory hall would cope with music were soon dispelled. The sound was solid in relation to the conditions, no distorting vibrations of window panes and iron structures took place even in louder passages. It’s hard to get rid of the overall impression of some kind of transitional ritual. It was as if the group had said goodbye to one era and opened up another with the baptism provided by smoke from Lukáš Slavík from the related Greynbownes. The set, in which older songs met those from the current album and which also included a five-track acoustic block, showed the full breadth of Dirty Old Dogs, all the faces of their work. From the post-grunge to the contemporary dark blues with gusts of psychedelia, all in a raw, lively and above all experienced and in some places literally euphoric form. 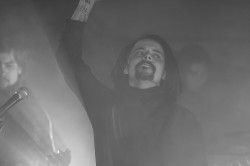 Three of the new songs – “One Day”, “Let’s Burn Heaven Again” and “Personal Darkness” – were heard only in the form of video clips, the third film also had its premiere. That’s how it should have stayed, but quite a large audience demanded an allowance. And what about playing other than the first two singles. And how dirty, imperfect their appearance looked! Concerts should not only be a musical event, they must also be a multifaceted experience that is complex and affects all the senses. The Dirty Old Dogs understood this, and caught the baptism in exactly that spirit. The ritual from the factory hall lingered for a long time. When there is vision and will, everything goes. Tomm Prochazka and his Dirty Old Dogs have enough of both and are not afraid to go hard for their goal.