“Let the music play and the sun shine,” Aneta Langerová from the stage of the DVA Studio in Prague spoke with hope in her voice. After the covid moves, she completed the autumn part of her “Two Suns or How Beautiful to Be Loved” tour for her fifth album last year. An album that looks great in concert.

During the two-hour program, Aneta Langerová mentioned that the album “Two Suns” was released more than a year ago, but it is still very fresh for her and the band – she has been waiting for her live performance for a long time. And it looks the same from the viewer’s point of view: only with the inclusion in the singer’s concert repertoire, it is as if the new songs have only come to life and their advantages have fully stood out.

Together with the performer and her accompanying group, the string trio has traditionally been present on the theatrical stage, and the Maranatha Gospel Choir has helped the gospel choir to have an even more rough sound in some of the songs. But about him later. The evening began symbolically with the title song of the aforementioned recording “Two Suns”. It was the songs from last year’s studio that prevailed in the setlist, a total of eleven were heard. However, this phenomenon could not surprise the singer’s regular listeners. It has become a habit for Aneta that when she puts together new material after several years of preparations, she lives with it for a while and plays it as soon as possible. She always offers the audience the songs with which she currently agrees the most and which characterize her current musical direction. So he calmly sacrifices his big hits: while “Sinful Bodies, Butterfly Wings”, for example, has not played for many years, the absence of aged perennials “Little Mermaid” and “Remembrance” surprised this time and admit that she froze a bit. 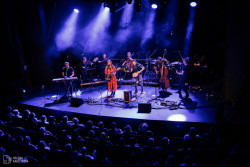 In the introductory block of mostly well-known pieces, the main actor quickly made contact with the listeners, and thanks to the chorus of the single “White Day”, she also managed to sing them a bit. She then offered an intimate window to her musician’s soul as she included three calmer songs from solar albums in a row: “It’s snowing in the mountains”, “Tam kam” and “Bat”. These were songs that required their maximum attention to transfer their mood to the audience, which not everyone and not always succeeds in listening to the album. But it turned out that live, when they are thus set among the older and well-proven repertoire, their charm really comes to the surface. However, the clear turning point of the performance came when Maranatha Gospel Choir took the stage during the “Body 2086” piece. His vocal accompaniment added an additional dimension to Aneta’s already diverse work. It manifested itself in the following film dramatic “Grass” – it was really impossible to defend yourself with goosebumps. After the single from the award-winning album “Na Radosti”, the audience expressed their enthusiasm with long-ending applause. 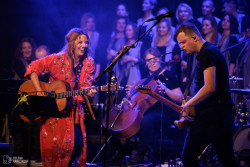 The connection with the choir worked well not only in slower pieces, but also in denser items, such as the navy “Holy Cord” or the emotionally swelling “Dizziness”: until many spectators wanted to jump out of the seat. Energy flowed from the stage with such force. Undoubtedly, one of the highlights of the performance was the vaulted ballad “How beautiful it is to be loved”, which with the aforementioned “Dizziness” created a captivating double block of non-honor love songs. Keyboards, strings, Aneta’s captivating highs, vocalists and minimalist stage lighting with several light bulbs – this turned out to be the perfect combination. The appendix part traditionally belonged to the “Living Water” and untraditionally to the song “Tree”, which closes the recording “Two Suns”. A lively presentation with the Maranatha Gospel Choir behind the back on the intensity of the experience also added to this captivating statement. 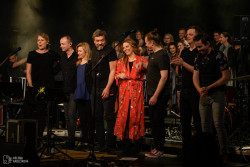 In the past, Aneta Langerová has been able to take her songs live to an even higher level, giving them something extra. In the case of the repertoire of the album “Two Suns”, however, it is really true that the stage interpretation literally brightened it up. In addition to an excellent singing and musical experience, it is also worth appreciating the singer’s unobtrusively natural and now absolutely certain communication towards the audience. Thanks to all this, the “Two Suns or How Beautiful to Be Loved” tour is worth visiting – another chance will be given to those interested in its spring part from February.

LIVE: Aneta Langerová was accompanied by a gospel choir in Prague. The goosebumps could not be defended