Asked what he thought about the fact that skateboarding was accepted as an Olympic sport, the superstar on the wheels Tony Alva replied: “they need us more than we need them”.

Fact. A sport that organized and solidified itself, after fighting for decades against prejudice, and turned into a gigantic and lucrative business without losing much of its original, rugged soul, where competitiveness and excellence were below fun and style , had much more to offer to an event that saw its audience aging than the other way around.

We saw something similar happen this week in the issue of Rock’n’roll Hall Of Fame. The founders of the association that created the ceremony are also concerned about the aging of their gold motorcycle club and have taken steps to change the sails, correct some injustices and move at the speed of the flea.

O Kraftwerk, co-creators of the world as we know it alongside the Beatles, they were nominated to win their hall of fame bracelet no fewer than six times and turned down by the curating committee. This year, on the persevering seventh attempt, they were finally admitted.

No one, founder or band member (the living, of course), attended the event. And that was no problem for anyone. O Kraftwerk invented the “sympathetic arrogance”. Quality that no one has ever been able to reproduce, despite having tried hard.

I’ve been talking about the two shows by the German quartet I saw in Brazil. They were treated by the public as the Beatles. Hysterical screaming from the moment Numbers’ beats started coming out of the soundsystem (without them even being on stage yet) until the final song.

No “good night”. No “thank you”. No “we love you brazzeeeeel”. Nothing. Not a smile. And yet, they were the most charismatic guys on stage I’ve ever witnessed.

Pause for another story from the music world. The young guard’s people hated the Mutants. Once, exchanging conversation with my friend and musical authority Ricardo Alexandre, he told me that when interviewing someone from that time (Renato, of the Renato & His Blue Caps, I think) about the reason for this hatred, the answer was: “we didn’t like the mutants because they thought they were so much better than us. And we knew they were.”

We are f#$and you know it

Florian Schneider and his class were always fully aware of the importance of what they were doing. The size of the robot. Besides them, the whole music world knows. I always knew, by the way.

“I think the Hall Of Fame should create another hall, destiny for those who created a musical genre” – he said Pharrell when presenting the Kraftwerk in the ceremony – “because this is where they belong.” That simple.

And then, the band that rarely gave interviews, hardly ever went on TV shows, and invented a kind of “mystery marketing” in the music industry, finally gets admitted to the Rock’n’roll Hall Of Fame.

And they don’t care. Much less the rest of the planet.

But for the event, for the hall of fame, the importance is huge. The other big artists, music icons can now say they’re right next door to Kraftwerk somewhere.

At the ceremony, the band was greeted by the guys from Depeche Mode, Human League, himself Pharrell, Run DMC e LCD Soundsystem, following a welcome protocol that admitted artists always receive at the event.

Who won the most?

I stay here thinking, if in the engineering minds of the group members (both those who are here and those who have already moved to some space station out there), they are not even half disappointed with what happened this year. I imagine, on Schneider’s own face, an ironic smile (yes, they smile, as I learned from an eyewitness, the journalist Tom Lion) to see the Hall of Fame, this giant music monument, exist without Kraftwerk. 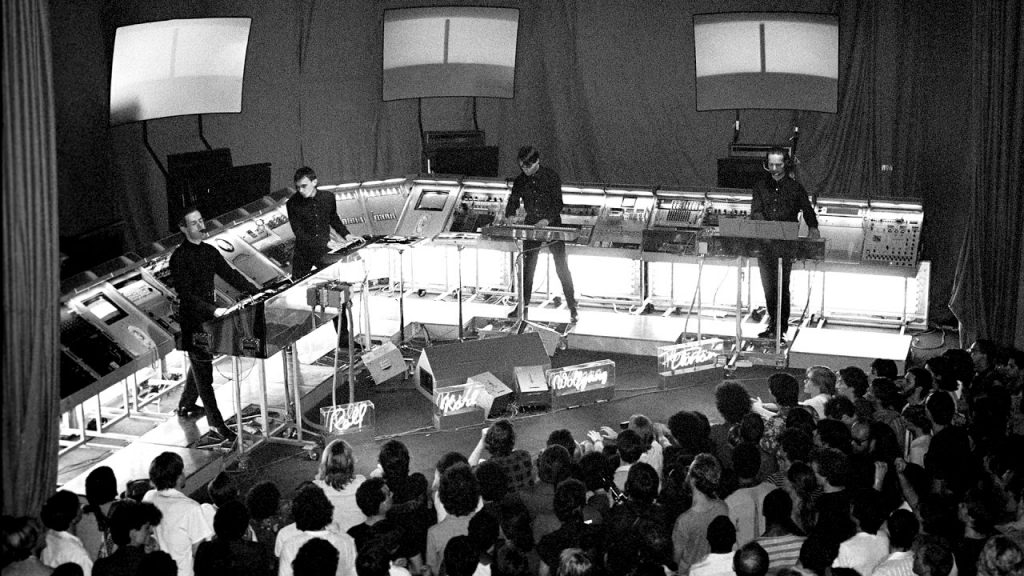 However, we can never criticize who corrects an error. Or in this case, six. May the Rock’n’Roll Hall Of Fame take full advantage of the new acquisition. May the electroplasmic waves that now interfere through the “hall” bring to all your fellow artists all the lightness, all the provocation and all the musical that for so many years has drunk us journalists, us musicians, us fans.

After all, Kraftwerk created, even before releasing their first album, their own hall of fame. It was his studio, the Ring sound (which did not have a telephone or a bell) and where no one but them could be admitted.

And they loved it.

And the rest of the world’s artists too.