Bicocca Università launches “paMELA” a research project funded thanks to Crowdfunding for the development of a low cost laser probe that will allow a fast and painless diagnosis of melanomas, thanks to the analysis of sounds.

Small as a pen and capable of “listening” to the sound generated by moles to detect melanomas early. It’s called “paMELA”, the low cost probe for the study and diagnosis of skin melanomas that can become reality with the crowdfunding campaign of the University of Milano-Bicocca starting today on Produzioni dal Basso, the first Italian crowdfunding platform and social innovation.

The research project, led by Elia Arturo Vallicelli, researcher of the Physics Department “G. Occhialini” of the University, was selected in the context of the third edition of Biunicrowd, the alternative finance program of the University of Milano-Bicocca, promoted to allow students, former students, professors, researchers and employees of the University to carry out innovative projects and business ideas through fundraising campaigns.

The economic goal of “paMELA” (Photoacoustic Melanoma Detector) is 8 thousand euros. Resources that the team will use to develop the prototype of a photoacoustic probe optimized for the diagnosis of melanomas, making the screening process quick, painless and low cost.

Although it represents a small percentage of skin cancers (less than one in ten), melanoma is responsible for 75 percent of deaths in the entire category and strikes at a young age: in Italy it is the third most frequent cancer under the age of 50[1].

Currently, the screening of melanomas is entrusted to the experience of a specialized dermatologist who performs a visual inspection of the skin nevi using the dermatoscope, a magnifying glass with polarized light. The specialist evaluates the shape, size and color of the moles and in the event of a suspicious situation proceeds with the surgical removal and histological examination of the tissue sample to assess the possible presence of melanoma and measure its thickness. Only this last detection allows us to state whether any melanoma is in an early stage, at the level of the superficial layer of the skin, or if it has already penetrated into the dermis, being in an advanced stage with the possibility of generating metastases. 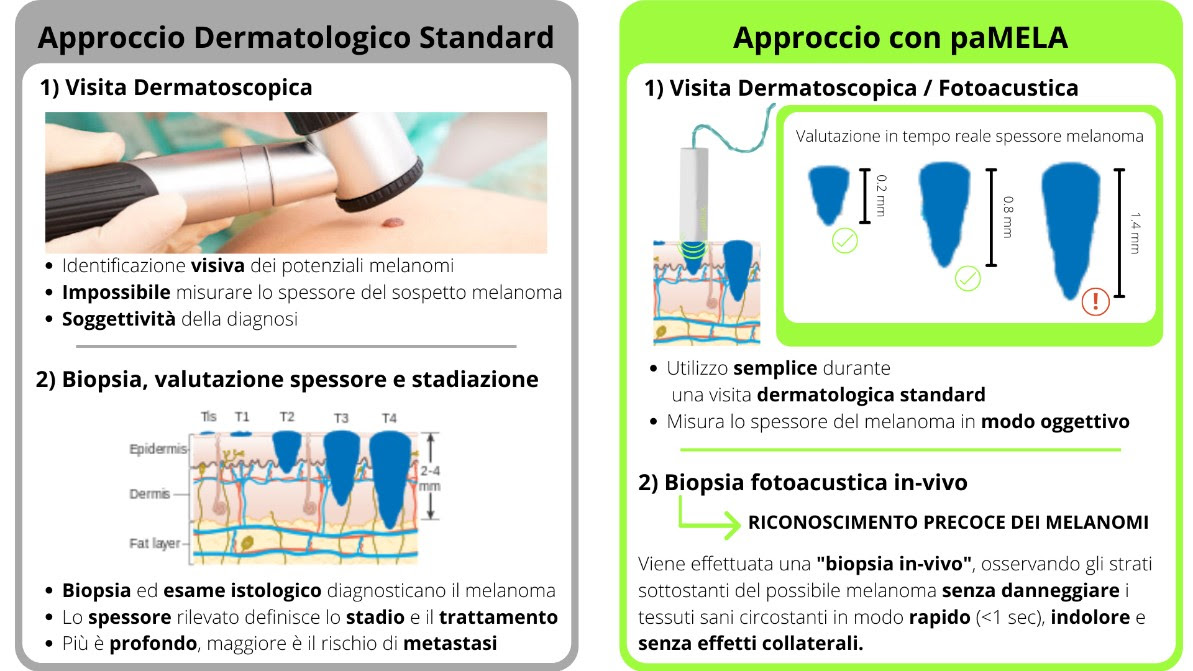 The mission of “paMELA focuses on the use of an emerging alternative technique for the study of melanomas based on photoacoustics, which allows a more accurate and less invasive diagnosis than traditional dermatoscopic techniques. All during a normal dermatological visit.

Combining the expertise of the University’s Microelectronics and Biophysics groups and the INFN Proton Sound Detector project, the team will develop a compact probe that will use an acoustic sensor to detect the sound generated by the suspected melanoma when it is illuminated by the small laser and it will reconstruct its 3D structure, observing the parts hidden under the superficial layers of the skin.
By studying the intensity of the acoustic signals (ultrasounds), in fact, it will be possible to obtain information on the density of melanin, on the shape and, in particular, on the thickness of the mole or melanoma. The acoustic signal will be processed by an analog electronics that will allow it to be amplified and converted into digital; a data processing software, on the other hand, will extract the information from the sound and allow the operator to view the parameters of the suspected melanoma. 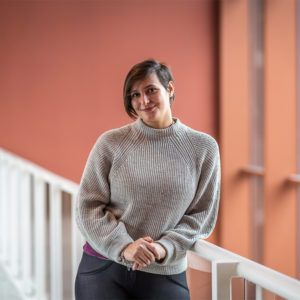 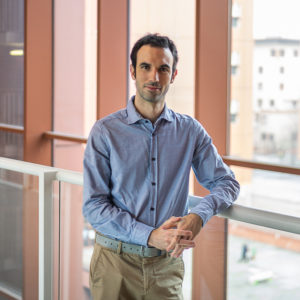 “Unlike the instruments on the market today based on the photoacoustic effect, which must adapt to the observation of a wide range of biological systems, the development of a compact probe specialized in the detection of melanomas allows to reduce costs and optimize the capacity diagnostics – explains Elia Arturo Vallicelli, team leader of “paMELA” – Our goal is to deliver in the hands of the dermatologist a tool capable of maximizing the accuracy of the diagnosis and subsequent therapeutic efficacy ».