A smart home with AVE home automation to rethink the idea of house in a hi-tech key. With this premise, a house was born in Brescia that concentrates the best of domotica DOMINA Smart e of AVE design thus inaugurating a new concept of inhabit between comfort, luxury and technology of the highest level.

Located in a prestigious residential area, adjacent to the historic center, thishome in Brescia becomes the symbol of a new way to think about the house: a contemporary reading for unconventional spaces, open to modern ones possibilities today offered by technology so much so that the rooms of this villa were chosen as the setting for the filming of the video dedicated to AVE IoT ready home automation: an even more advanced and human-friendly proposal, which includes the control of automations from app and through voice commands through the Voice Assistants most popular on the market.

Adjacent to the entrance threshold of this smart home two were placed touch screen DOMINA Smart to make thehi-tech imprint which governs the residence. As soon as you enter the door is the wide 15 ”display of the TS05 supervisor to grab attention. Top of the range of the AVE e technological heart of this home, this device, thanks to its exclusive front in glossy black mirror glass, also stands as a distinctive integrated piece of furniture, setting itself elegantly in the home. Still on the same wall, on the other side of the door, the innovative was installed mini touch screen TS01 4.3 ”, oriented horizontally to conform to the well-kept interior design project. 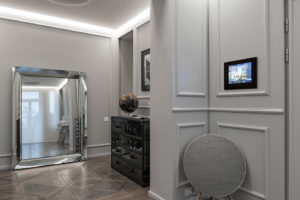 Thanks to these home automation supervisors the entire house is governed down to the smallest detail, allowing the management of functions such as the movement of the electric windows, the gate and the access door, the roller shutters and the internal curtains, the control of the lights of the sophisticated lighting system, the burglar alarm and the thermoregulation for the different areas, the installed cameras, as well as the control of loads to maximize the energy saving with advanced supervision tools. 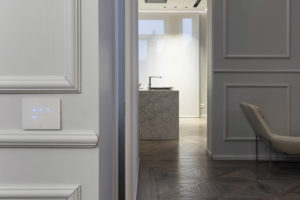 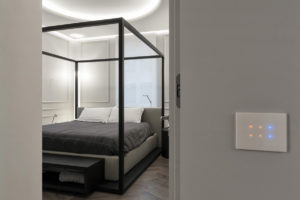 In this smart home with AVE home automation to call up the different functions from the various points of the house the advanced were also positioned touch switches, here combined with the sought-after plates Vera Touch in white glass with a glossy finish and available in Multi-Touch version with up to 6 independent controls. The result is gods unique light points, which is sufficient to touch to recall the actions implemented in them. A modern and sophisticated touch that weaves a new relationship with the home, certainly in step with the times. The switches are hidden behind the minimal and ultra-flat geometries of the touch plates, identified by delicate LEDs that change color as soon as touched so as to make the status of the associated loads immediately recognizable. The same design that distinguishes the touch controls is also taken up by the finishing plates placed around power sockets, thermostats and all the visible elements of the system belonging to the Domus 100 white domestic series, in order to support the very accurate overall project with style and distinction.

Home automation and design with AVE come together. A synergy that inaugurates a new concept of living in this house in Brescia: one smart home with a welcoming face, free from any scheme, intuitive, avant-garde, conformed to the needs of the contemporary man who loves to be flattered by the potential offered today by technology.

Do you want to create a smart home with AVE IoT home automation? Request information”

In Brescia, a smart home with AVE home automation to rethink the idea of ​​a home in a hi-tech key