The main movement of Los angeles lakers this summer was the acquisition of Russell Westbrook. Dominant player in the regular season and who has just signed some fantastic 22.2 points, 11.7 assists and 11.5 rebounds per night with Washington Wizards. It has been their most mature season per game, although the Lakers will have to adapt a figure of Russ’ impact to a team where they already have two of the most decisive players on the planet, LeBron James and Anthony Davis.

Spacing will be the main issue. Till the date, Westbrook has been negative for his teams when he did not have the ball in his hands. He has few movements without the ball and accumulates a poor 29% in triples in the last three seasons (27.6% in the same stretch in Playoffs). If shooters were already needed with James and Davis, getting space will be even more important now with Westbrook in the equation.

We still don’t know what the Lakers’ starting lineup will be, although everything points in two directions. Each one has its explanation and meaning. Let’s analyze the two ways that Frank Vogel has to start the games with the Los Angeles team.

Davis said when he came to the Lakers that he prefers to play power forward. Or rather, in the regular season he is in favor of having a defensive pivot at his side that reduces his workload. It makes all the sense in the world and is positive for both the organization and the player. And in fact, that’s how it was in their first year, the one they ended up as champions at Disney: he had JaVale McGee and Dwight Howard to cover him, and so he played 60% of his minutes as power forward in the regular season. In Playoffs the sample was reversed: AD played 60% of his time as five.

Mind you, Davis’ second season at Lakerland has been different. In regular season they gave him more rest, passing 91% of possessions as power forward. In the 5 games he played in the Playoffs, the dynamic was maintained and he played 80% of the possessions as 4. Why? Because of the size of Phoenix and the presence of Andre Drummond, whose performance was far from positive, both for his own performances and for diverting the option of AD as five, although this was Vogel’s decision.

More | How does Russell Westbrook fit into the Los Angeles Lakers?

The fact is that now it will be different. Davis, Westbrook and LeBron shared a dinner at James’ house when the trade was confirmed. According to the LA Times, the three All-Stars vowed to put their egos behind to make the union work. And in particular, AD told Russ that he would play longer as a pivot if that was in the best interest of the team.. It was part of a conversation in which LeBron also said that if he had to play more power forward than forward, he would.

The fundamental aspect of ranking AD as a five is the opening of the court and the mobility it gives to the defense. Trevor Ariza would enter the quintet, a 3 & D who has lost the shine of the past, but who in Miami proved to be still useful. It will be interesting to follow the outside success, since in the regular season with the Heat he was in a correct 35%, but in the Playoffs he collapsed – like the whole team against Milwaukee – to 29.4%. Of course, it had interesting explosions.

Quintets with an AD of 5 not only allow more space, and therefore room for Westbrook penetrations or LeBron posting actions, but also increase the defense’s ability to react. A quintet with Westbrook, Horton-Tucker, LeBron, Ariza and AD has a lot of size and mobility. They would only suffer against heavy fives like Rudy Gobert or Nikola Jokic. The pivot Davis lineups gave the Lakers very good results in 2019-2020: an attack that produced 112.5 points per 100 possessions (65th percentile) and a defense that fit 106,7 (84th percentile). 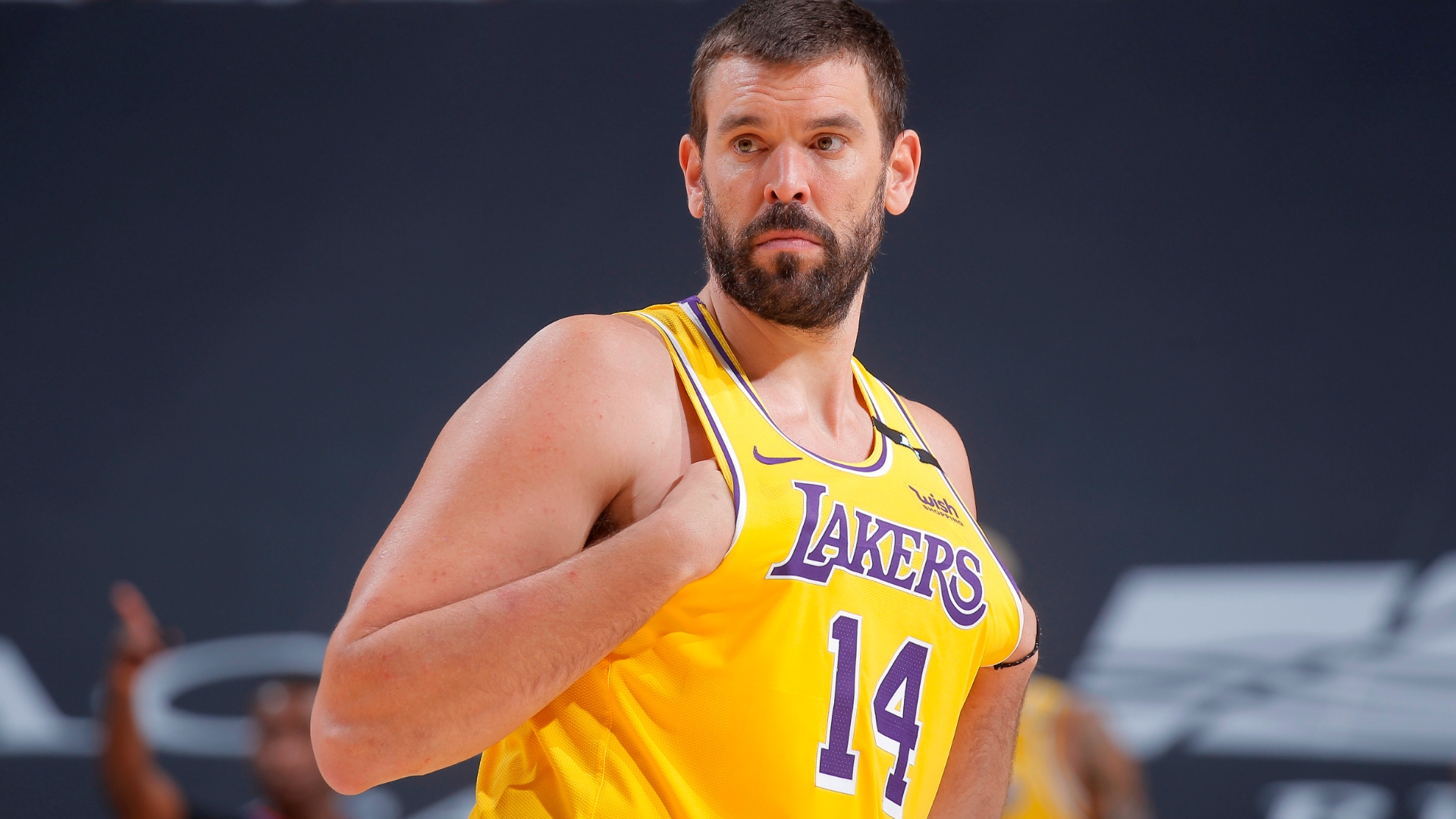 The previous case is cemented, in part, in the possibilities that Gasol will not play the entire season with the Lakers. Marc Stein, one of America’s most trusted journalists, said in his newsletter that Marc “is not insurance” to return to Los Angeles, despite the announcement the player made after being eliminated in the Games. This would make sense if they have little confidence in what you can contribute and opted for the Davis route as the starting pivot, while Dwight Howard appears as five substitutes and Carmelo Anthony acts as four reserve after Ariza.

That said, just as it makes sense to go out with Davis starting five, so does it make sense to stick with Marc and use him as a starter. In the Olympic Games he offered a very poor version, but it is that his physique no longer gives to be the reference of a team. However, with the Lakers his role is different. Shooting, defending and passing are the three keys. The question is, does it fit into this new project?

The Lakers will seek to defend and fly, taking advantage of the fact that they have three beasts to devour spaces in transition and a good list of shooters. But there, at that high rate, Gasol does not fit. It does make sense as a defensive element against Joel Embiid, Nikola Jokic and company (Davis lacks some size) and as a pivot to open the court. It is true that the sensations of his 2020-2021 are negative, but since the signing of Andre Drummond his performance has improved, including triple: a 51.4% (2.2 attempts in 17.1 minutes) in the last 17 regular season games; and 63.6% (2.2 attempts in 17.5 minutes) in 5 Playoff games.

Gasol also favors cuts and off-the-ball play for his team, as he demonstrated last season with his connections with LeBron himself or with Kyle Kuzma. This asset should be considered for the next course. If we are going to see Westbrook act more without the ball, having Marc how to distribute from the header would be interesting.

We know that in defense the problems would come from speed. When he is paired with a great outside manager, like Bradley Beal, who already had a bad time a few months ago, Marc has problems when he does not arrive with his displacement. Far from the rim he suffers, and when he suffered all the Lakers did. The base of the team is defense and both AD and Howard offer greater versatility when keeping small. The alignments with Gasol of 5 gave irregular results in 2020-2021: an attack that produced 109.5 points per 100 possessions (31st percentile) and a defense that fit 105,9 (95th percentile)

In the case of using Gasol as a starter, Davis would start from the power forward position and it would be more protected during the regular season. It would be essential that Marc was fine from the triple, since that is where they spend a good part of their options to have a role in these Lakers. The pivot rotation would have three names (Davis, Marc and Howard), while LeBron, Ariza and Carmelo could have minutes in the four.

The opinions expressed herein do not necessarily reflect those of the NBA or its organizations.

Many Thanks To The following Website For This Valuable Content.
Anthony Davis or Marc Gasol: who should be the starting pivot of the Los Angeles Lakers? | NBA.com Mexico